Home → Brückners Time Signals → Shares or Wrist? The Watch Investor has to Decide 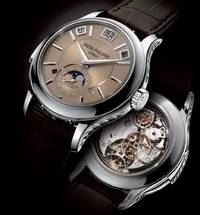 Shares or Wrist? The Watch Investor has to Decide

Those who don't have the money for a Porsche simply buy shares in the Stuttgart-based sports-car manufacturer. At least the investor will be able to claim to have a big name as far as securities goes, if not in the garage. Because I primarily invest in watches, some years ago I had no other choice than to make do with this type of depot variation and to be content with a middle-class vehicle in the garage. For a long time, the Porsche shares developed admirably, and I would have foolishly held onto them for quite a while longer had one day the tax office not sent me an assessment notice, causing me to sell the shares. My thanks go out to the tax authority, because I was able to sell the shares at an all-time high, saving myself the bother of having to deal with the share crash that was to follow, and with the transfer of funds to the tax office, I made quite a small contribution to the financing of the scrapping premiums (or the bank rescue plan). In a crisis, solidarity is a requirement.

About two years ago, a colleague asked me for my advice as to what is more sensible – to invest directly in watches or in the shares of the leading luxury watch company groups, such as Richemont (Lange & Söhne, Jaeger LeCoultre, IWC, Panerai), Swatch (Omega, Breguet, Blancpain, Glashütte Original, Swatch, etc.) and Louis Vuitton Moet Hennessy (TAG Heuer, Zenith and Hublot). I advised him to make a direct investment in watches. My reasoning was this: Who's going to fall in love with shares? However, this has been known to happen with an elegant watch. My colleague really wanted to purchase Rolex shares. I assured him that I would also like to do this, but unfortunately Rolex is not a listed enterprise.

So he quite happily invested in Richemont and Swatch and gave me the unflattering reasoning behind this decision: “As long as there are watch lunatics like you around, nothing can go wrong”.

The shares began to substantially increase in value. However, unfortunately there was no merciful tax office nearby which would have plundered my colleague on time, and before the crash. He kept his watch shares and experienced a rapid decline. Richemont fell from more than 35 to just 9.60 euros, Swatch fell from more than 235 to about 79 euros. This was a hard blow – and securities, as everybody knows, do not have Incabloc shock protection.

My colleague was so frustrated he sold his complete share package. This may have been his second mistake, because meanwhile, the shares made a recovery. The first analysts are emerging from their hiding places and now recommend certain watch shares as promising investments. In particular, Swatch has impressed the financial experts. Unsurprising, as this is truly a "pedigree" watch share.
When I look at the bankers in the top Frankfurt restaurants, the majority wear Breitling, Rolex and also – as they get closer to management positions – Patek Philippe. Not a single one of these manufacturers is listed, as everybody knows. Thus, there is nothing to be gained from a sustained bull's market.

Nevertheless: In the long term, watch and luxury shares are very interesting once again, because no crisis lasts forever and the basic current prices do appear to be quite moderate, as an analyst explained to me. "In the long term", the national economist John Maynard Keynes warned of the dangers of patient waiting; "in the long term we will all be dead“. Therefore, I'd like, at short notice, to give myself the pleasure of a new watch – and with this gift, make a modest contribution to the long-term performance optimisation of the shares concerned.