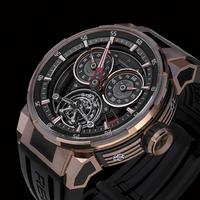 Remarkable in its complexity, the Predator 2.0 Regulator Tourbillon fuses racing cars and exceptional timepieces in a 30-piece limited series, where design rivals with an impressive command of watchmaking expertise.

Developed in collaboration with designer Eric Giroud, the Predator remains true to the Rebellion spirit: uncompromising authenticity and assertive design, quality and performance. This decidedly masculine timepiece boasts technical and aesthetic features drawn directly from the world of racing cars, from the disc brakes to the pedals.

With its REB-5 Tourbillon, this Rebellion timepiece is doubly amazing! While its tourbillon complication is a tribute to Swiss watchmaking, it also represents a real leap forward in 21st century technology. The design talent of Eric Giroud combined with the technical expertise of Laurent Besse has resulted in a unique timepiece.

Despite its relatively classical shape, the Predator perfectly encompasses the passion of REBELLION 's founders for endurance car racing. A passion that carries through to the race team that wears the brand's name, 'Racing Rebellion', which participated in the Le Mans 24 hours and the Le Mans Series in 2010, with two Lola LMP1 driven by Nicolas Prost, Andrea Belicchi, Neel Jani and Jean-Christophe Boullion.