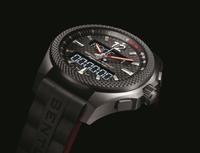 The magnificent Breitling for Bentley adventure first hit the road in 2003 with the launch of the Continental GT, for which Breitling notably designed the dashboard clock.

Since its launch in 2003, the collection of Breitling for Bentley chronographs has matched exceptional mechanisms with quintessential British style. The essence of Britain. Made in Switzerland by Breitling. No one was better placed to embody this inimitable blend of elegance and luxury, originality and true class than David Beckham, the icon who has become the ultimate symbol of British style.

Worldwide horizons BASELWORLD 2013: The Breitling for Bentley B05 Unitime

For those who view travel as an art of living, Breitling for Bentley has created the Bentley B05 Unitime, a worldtime chronograph powered by an innovative Manufacture Breitling movement with a patented mechanism. Thanks to its double-disc system, this instrument boasting unprecedented user friendliness enables instant reading at any given moment of the time in all 24 timezones.

Keeping time with meridians BASELWORLD 2013: The Breitling for Bentley B04 GMT

A watch for businessmen as well as all those with a taste for accomplishments who live and communicate across all longitudes, the new Bentley B04 GMT stands out for its extremely functional dual timezone system, combined with a highperformance selfwinding chronograph.

The Breitling for Bentley spirit BASELWORLD 2013: Bentley B06 - A highly exclusive chronograph

A perfect emblem of the Breitling for Bentley spirit, the new Bentley B06 chronograph weds sophisticated aesthetics with Manufacture Breitling Calibre B06. It is distinguished by its ingenious “30-second chronograph” system, inspired by a Breitling patent dating from 1926 and based on a central hand sweeping around the dial in half a minute – thereby ensuring extremely accurate 1/8th second time readings.

Barnato. The name of the most famous among the "Bentley Boys", the men engaged in a passionate pursuit of victories and accomplishments that included winning the Le Mans 24 Hours Race no less than five times between 1924 and 1930. Also the name of an exceptional chronograph combining superlative style with peerless performance.

On February 18th 2011, in the north of Finland, a special version of the Bentley Continental GTC Supersports convertible set a new ice speed record at 205.46 mph (330.695 km/h). In thereby testing its fastest and most reliable car ever in such extreme conditions, Bentley once again proved its supremacy in terms of technology and engine performance. Strapped firmly to the wrist of driver Juha Kankkunen was the new Bentley Supersports Light Body.

Breitling for Bentley is lining up two exceptional champions on the starting grid. Named in honour of the most famous of the Bentley Boys, who was also the first driver to win three consecutive editions of the Le Mans 24 Hours (1928, 1929 and 1930), the Bentley Barnato and the Bentley Barnato Racing chronographs are distinguished by their peerless performances and their resolutely out of the ordinary design. They feature ultra-sporty dials, including one with a highly original disc-type totalizer system.

Breitling for Bentley announces a new feat enriching the impressive track record of achievements by the British carmaker. Near Oulu in northern Finland, a special version of the Bentley Continental GTC Supersports set a new world speed record on ice by driving at the impressive speed of 205.48 mph (330.695 km/h), thereby shattering the previous record also set by Bentley with a Continental GT in 2007.

After springing a magnificent surprise with its amazing Flying B, Breitling is enriching the Breitling for Bentley collection with a chronograph version of this stylish timepiece. The new model features the same daring rectangular case with its inimitably opulent lines, enhanced by two smoothly integrated lever pushpieces.